Seoul the capital of South Korea is a rising destination among tourists and backpackers. This city is a place where I felt like I knew the place even though I never been here before. It felt like at home right away and as a city it’s really easy to explore.
The best thing is to get a metro card so you can get around the city more easy.

It’s a very big city and my longest metro ride was about 30 minutes from Insadong where my hostel was to Gangnam. The Han River splits the city in two but with the metro you can get everywhere very fast.

one of the smaller side streets, full with shops, karaoke bars and restaurants

One of the places that I visited was Gangnam and just like in the famous song of Psy “Gangnam style” it has its own style. People are dressed up differently than in the rest of the city, you see the rich with their big sports cars, the billboards and fancy shops. It was nice to wander around a bit but other than that it’s nothing special, so I didn’t stay to long and took the next metroline towards one of the nicest temple complexes of Seoul the Bonguensa temple.

Close to my hostel in Insadong, about 5 minutes walk stands the big Gyeongbokgung Palace which is a 14th Century Royal Palace of the Joseon Dynasty.
The Gwanghwamun is the impressive main gate and in front of it you have the Gwangwhamun square with statues of Admiral Yi Sun-Sin and of King Sejong on his throne.

King Sejong on his throne 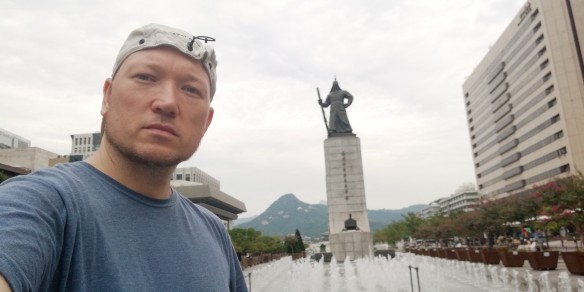 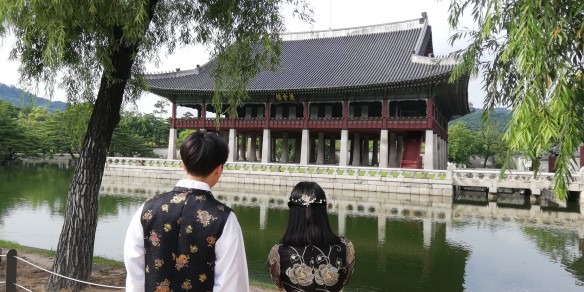 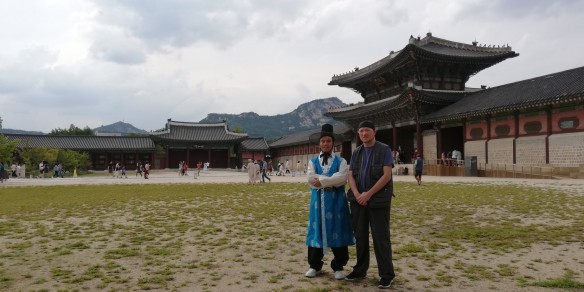 Here I am with a local, him in traditional clothes and me casual in front of the  Heungnyemun gate 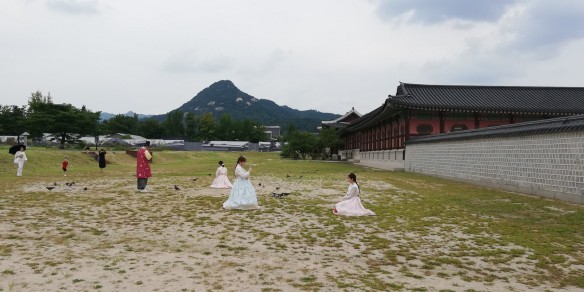 The Palace is the largest one in Korea and inside the Gyeongbokgung complex, there are 2 museums, the National Palace Museum of Korea and the National Folk Museum.
Next to it stands the five-story big Pagoda that you can see from a far distance when entering the temple.
Another impressive gate within the complex is the 2nd gate or the Heungnyemun gate, I found some locals who were dressed up in traditional clothes to have a picture together before that gate. The locals really like to dress up in traditional clothes when visiting their temples and some tourists like to do the same and therefore hire these traditional costumes in nearby shops to make themselves look nice in pictures I guess.
I respect the Korean culture and I think Koreans look better in their traditional clothes than Westerners do. 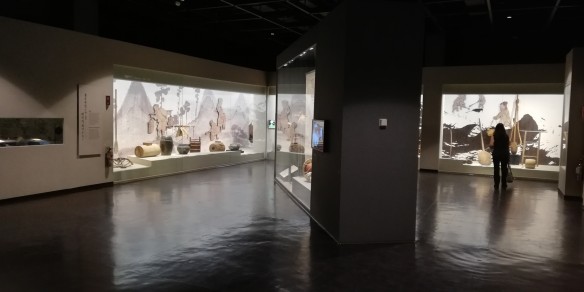 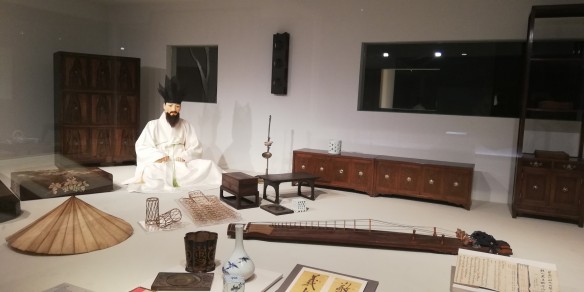 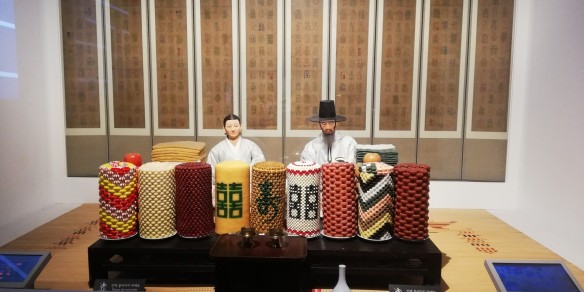 In the museum you can see the different Korean costumes that exists in the country. Every region has its own style

Other places to check out in Seoul

This place in Seoul shows how Korean villages looked about hundred years ago, narrow streets with traditional Korean houses known as Hanok. There are signs in the streets but also at doors and gates of the houses to ask the visiting tourists to be silent not to disturb the people who live here. 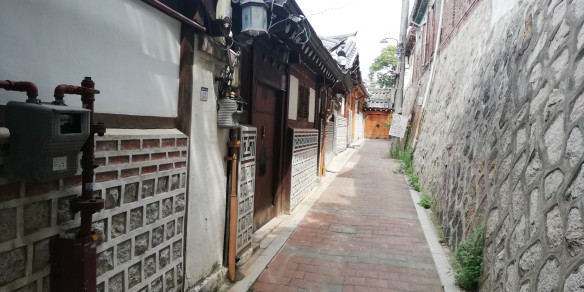 one of the many narrow streets 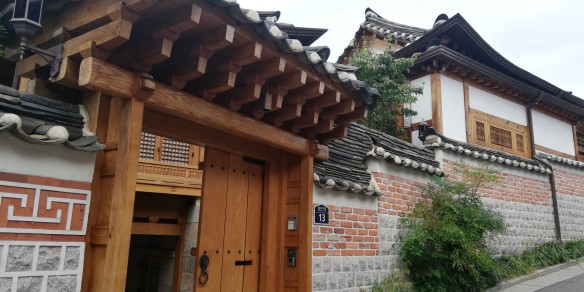 The Olympic games in Seoul go back already to 1988, but Seoul would be a great city to host the Olympics again if you ask me.
The World Peace gate is the most stunning gate of the Olympic games, very colorful with underneath it the eternal olympic flame.
I walked around at the Flagpole plaza and the olympic park who still has about 6 stadions of the 1988 games. Some remarkable monument was the giant thumb. 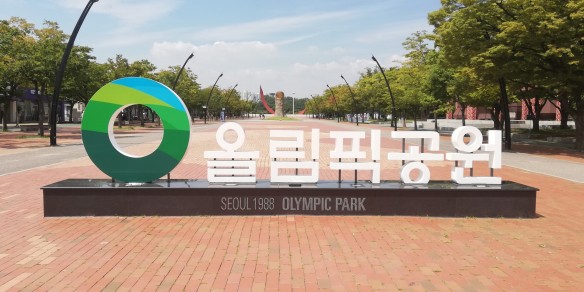 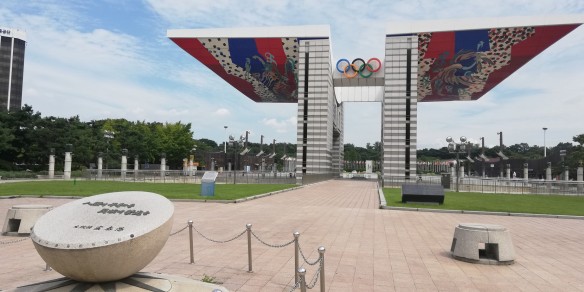 me with the Olympic rings 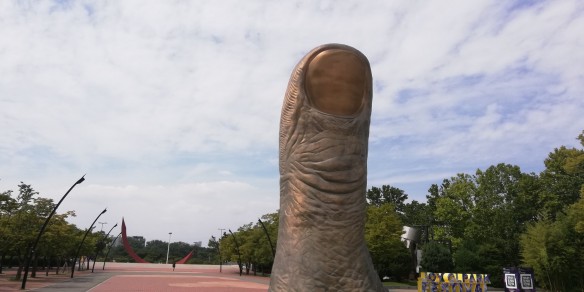 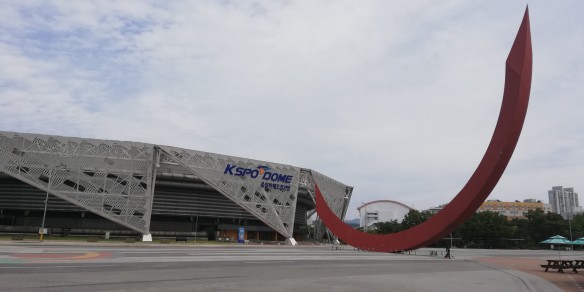 This was the residence of the Royal family back in the 17th Century and it’s got a secret garden that you can visit for additional charge, as this is not included in the ticket price for the Palace. The garden is accessible at fixed hours, that’s the reason why I didn’t go.
I wandered around in the Palace complex and there was enough for my eyes to stare at, like for example the Injeongjeon Hall.

Main Gate of the Changdeokgung Palace 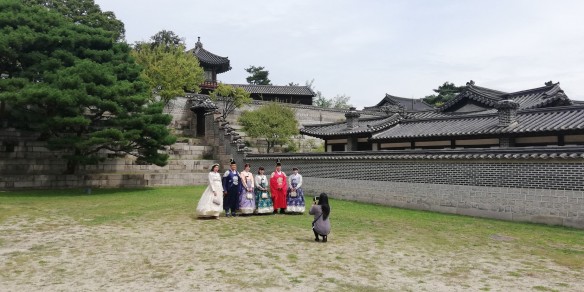