The City of Peter The Great !

I came to St. Petersburg by high-speed train “Sapsan” from Moscow, only 4 hours to the City that lays at the Finish Gulf. I didn’t bring the hot Moscow weather with me cause in Sankt-Peter there were moments with a lot of rain and besides the touristic sites I wasn’t in the mood to explore the city more on my own. Sometimes the sun came out peeking and that was usually when I wanted to take picture of something that it stopped raining for a moment, call it crazy luck.
Sankt-Peter as the Russian call the city, is the pride of Russia, it has so much to offer for tourists, that you need several days to see everything.
Despite the rain it’s a city with a nice vibe, nice European style streets and houses to walk by, many ways to get around by tram, bus and metro.

Places that I visited were the Blue & white Smolny Complex with its cloister and Cathedral build for Elizabeth Peter The Great’s Daughter who became a nun.
Peter & Paul Fortress by the Neva River that was built on a small Island to protect the city from Swedish invasion. It also served as a prison and nowadays it’s a museum with a Cathedral that you can visit. This Cathedral with its bell tower contains a big carillon that was a gift from the city of Mechelen in Flanders (Belgium) for Peter the Great, it contains 51 bells. It was Peters idea to bring back the musical revival in his city. 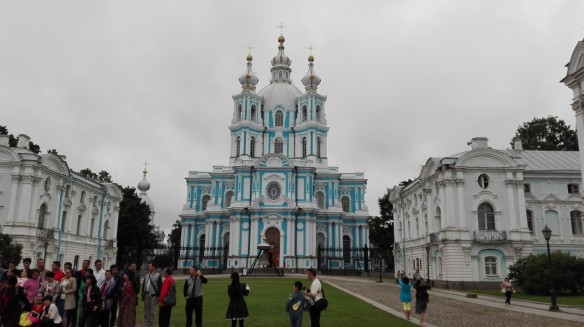 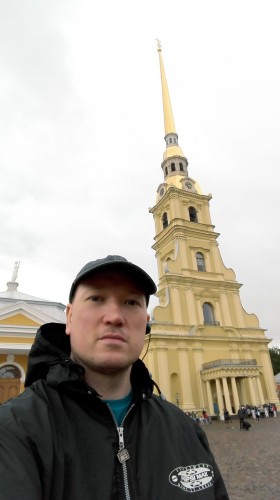 The Alexander Nevsky monastery with its cemetery where historically famous Russians like Dostoevsky and Tchaikovsky are buried.
Saint Isaac’s Cathedral which is the biggest Russian Orthodox Cathedral in Sankt-Peterburg and it really stands out with its doors of bronze and its golden dome, you can see it from different parts of the city.
The interior is also stunning and makes your mouth fall open. From all parts of Russia multicolored granites and marbles were gathered to compose the internal features such as columns, pilasters, floors.
At Palace Square I visited the Hermitage with the Diamant room which unfortunately was not allowed to take photos of. 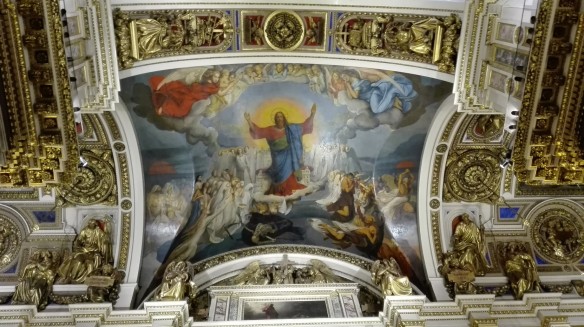 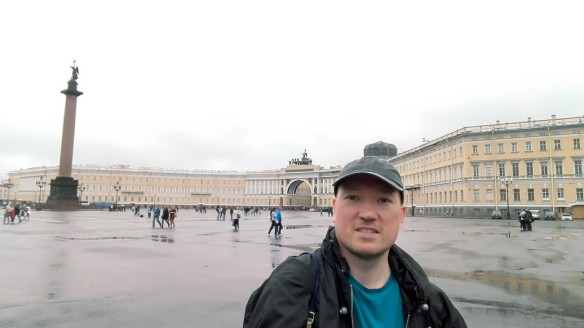 25km outside of the City I visited Peterhof, the Palace of Peter The Great at the Finish Gulf. This residence has magnificent rooms, in different styles, it gives you an idea about how life was for the rulers of Russia. Golden statues and fountains of the Grand Cascade in the garden makes this place look unique.

Grand Cascade with its golden statues

the sea channel in back of me

Another Palace about 35km away from Sankt-Petersburg is the Catharina Palace or Pushkin Palace. It used to be Katherina’s summer palace with its famous Amber room (no pictures allowed, but you can find them on google anyway) and the ball room.
I liked walking around here and see this for myself and I must say Russians can be proud of Sankt-Petersburg and their palaces. 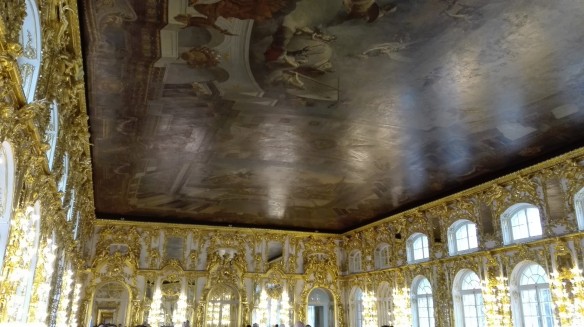 room with Flemish and Dutch paintings 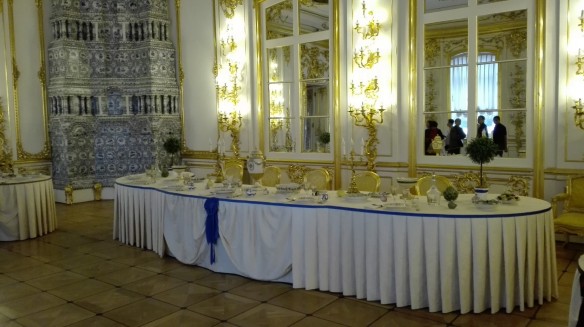 at the Gardens park

A Country that’s almost on the news everyday and I haven’t been there yet ? I’m talking about Russia.
The biggest country on earth, historically a lot in common with Europe and partly being part of the old continent and also of Asia.
Wonder how life is there, how Russians are. Since this is my first visit to Russia I decided to do a classic trip visiting its capital Moscow and Sankt-Petersburg. 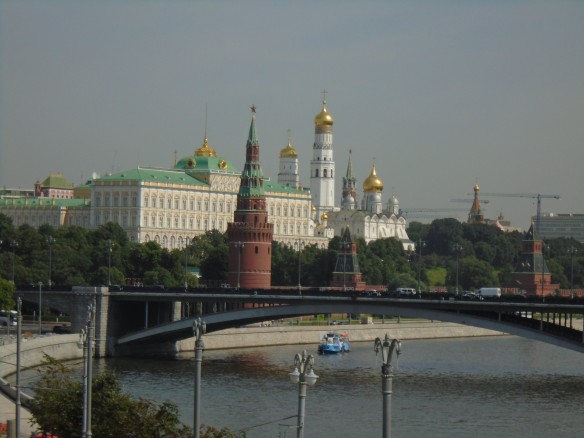 One of the biggest cities in the world, a lot of traffic, took me 1 hour to get from the airport to the city centre and its only 30km !
I saw big expensive cars, but also old lada’s, yes they are still present which is nice, it gives you a feeling for Russia, you realizing you really are in a post-sovjet country. On some buildings still the hammer and sickle is showing and the red star.

What is there to see ?

There is a lot to see in Moscow, everywhere you go you see nice buildings in different styles, but since my visit was only 2 days, I did the classic touristic sites such as : The Red Square (which was half closed because they were preparing for some military festivity), off course the famous Saint Basil’s Cathedral, the Kremlin with the Tsar-bell and Tsar-cannon and its many cathedrals and churches with golden domes. 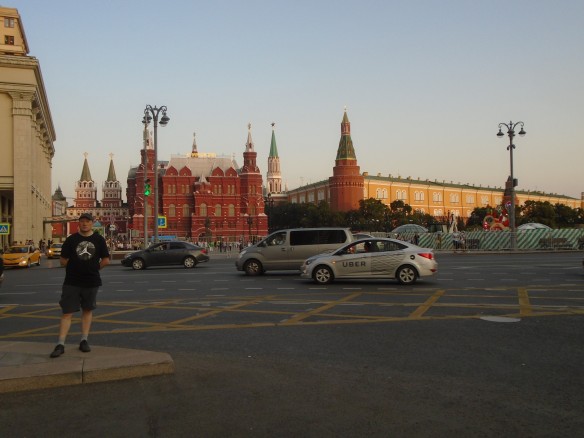 On my way to the Red Square 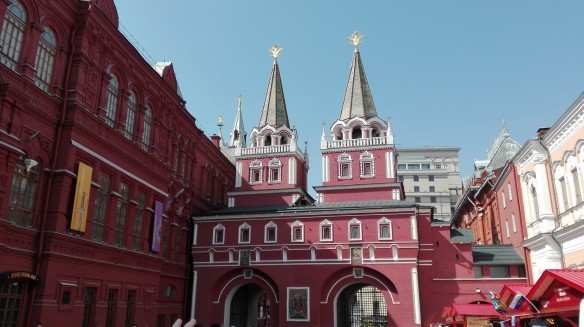 The gate through which I entered the Red Square 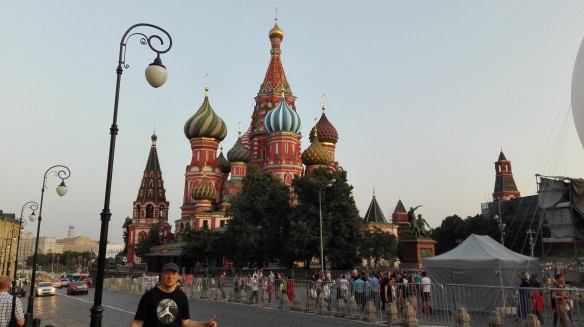 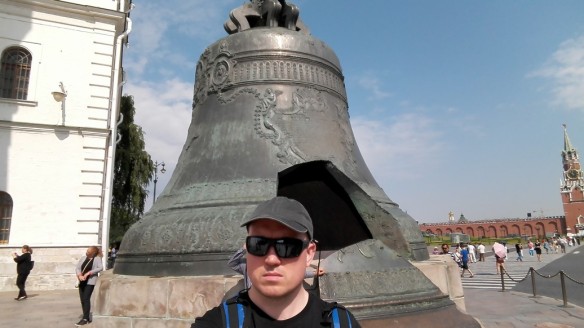 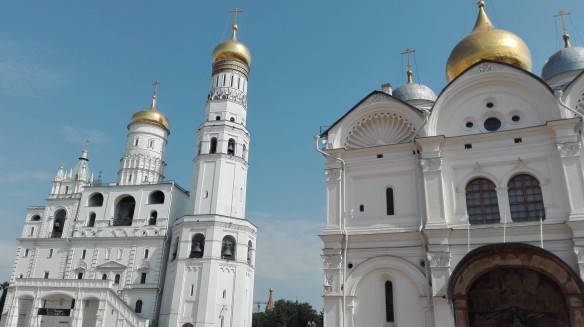 Cathedrals and churches behind the Kremlin walls

However the first place I went to see was the Novodevichy Convent aka New Maidens’ Monastery a Unesco site surrounded by a park behind big walls with twelve towers. The most famous building at the convent is “the Cathedral of our lady of Smolensk” which was under construction so I didn’t get to see that. To be honest all the cathedrals in Russia are nice but they all look a bit the same to me, it’s the little towers and the golden domes that make them all look beautiful and spectacular looking in the distance. When you drive into the city you see them domes standing out from these Orthodox Cathedrals and churches it has something special.

One of the towers of the Novodevichy convent in my back

Next stop was the Cathedral of Christ the Saviour situated on the northern bank of the Moskva River, on the backside of the cathedral there is a bridge over the river from which you have a view on a big statue of Peter the Great standing in the river on one side and a view over the Kremlin on the other side of that bridge.

Cathedral of Christ the Saviour 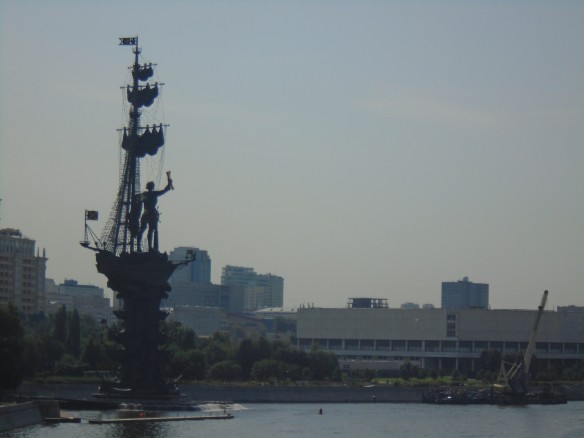 Statue of Peter The Great in the Moskva River

Then I made my way towards the red square, where there is a big mall next to it, the GUM department store, there I had lunch in a Russian restaurant on the top floor, really good and not expensive at all, besides tourist a lot of locals were als eating there, can’t remember the name of the restaurant but there are many places to eat, besides restaurants, there are shops and even a movieteatr. 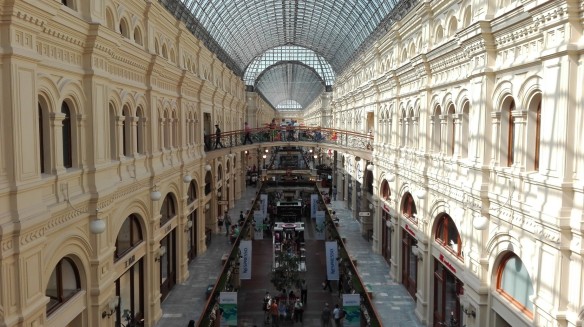 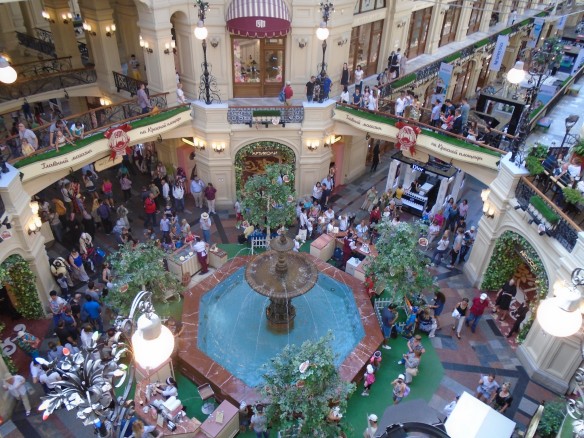 A nice place to see Moscow is at Vorobyovy gory (Sparrow hill) from here you can see a great panoramic view over Russia’s Capital city, its adjacent to the Moscow state University which is just another bombastic building, real piece of architecture.
It’s easy to get there by metro, you step out at Vorobyovy station and from there you just walk to the observation point up hill. 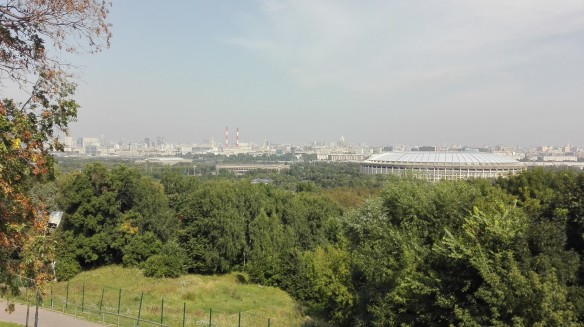 Panorama of Moscow with the Luzhniki Stadium, which will host the Opening Match and Final of the 2018 FIFA World Cup 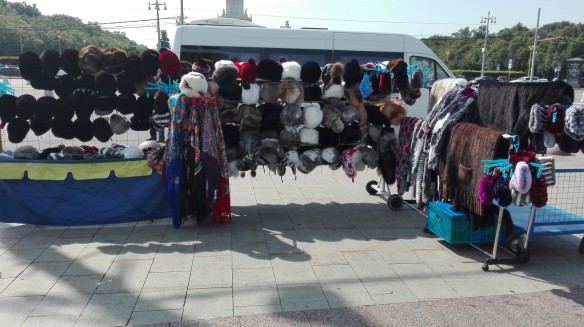 Going down the Metro

Speaking about metro, the one of Moscow is worth a visit many stations are well decorated, with sculptures, glass work, statuettes, mosaics on walls and ceilings. It’s really an underground palace, if only the metro in Brussels could be like that.

look at the ceilings in the metro, decorated with Mosaics

Walls are also decorated with Mosaics

Hammer and Sickle, the symbol of the Soviet Union

Metro station decorated with glasswork on the walls 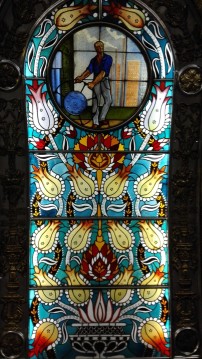 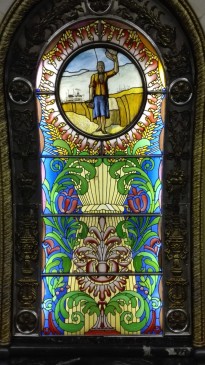 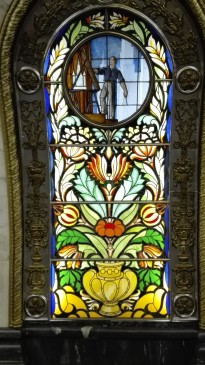 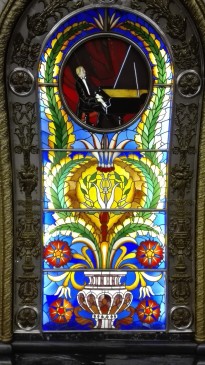 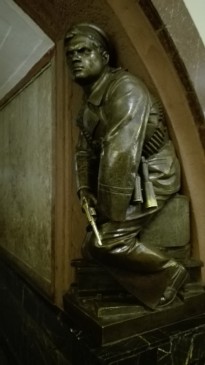