The same day I did the dog sledding activity, I was up for some more Arctic fun. One of the things that is as popular as dog sledding is chasing the northern lights. You have to be lucky to see them, the sky needs to be clear, which  means no clouds and also there should be no night pollution. That’s why you need to get out of the city of Tromsø cause there is too many lights at night in the city.

I booked this tour with pukka travels and the meeting point was at the new terminal building by the harbour on the 2nd floor. Where I got a little briefing about the polar lights aka northern lights aka aurora borealis. So many names for the same natural phenomenon.
The guide and driver were talking to us what the chances are of seeing them and they told us that they had good hopes as the skies looked clear, which is one of the important key things to succeed in finding the polar light activity in the sky.

Best I could do with my cellphone, little blurry

Pictures taking by our guide, this is how it should look 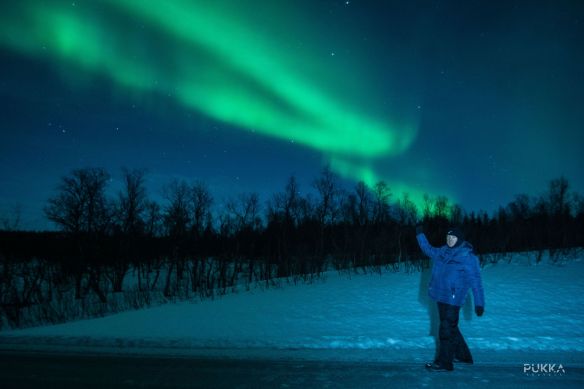 Here I am with the Northern lights 🙂

The northern lights are a natural phenomenon found in the northern and southern hemisphere of the Pole circle.  It starts on the surface of the sun when solar activity gasses are being ejected into the atmosphere and when it collides with the invisible magnetic field of our earth.

You see a bright shine in the dark sky and on camera that looks green when taking a picture, however you need to do some camera adjustments. Not all camera’s are good for that, but when you book a tour the agency takes the pictures for you as they have the right equipment with them. You also need a stable tripod, cause when the camera just slightly moves while taking a picture, the green shine on the picture won’t be coming out so nicely, it will be blurry and will have more the look of a painting rather than a picture.
My guide and driver they also knew some tricks that you can do with a torch while taking the picture of the northern lights, it takes 10 second to process and in the meantime, you have to stand still while the other person can make drawings with the torch around you to create a special effect. The guys were from Poland, but they knew what they were doing and made a drawing of a crown (looks more like the M logo of Macdonald’s) and something that looks like Love PL (love Poland). Makes sense to me cause I have Polish roots. See pictures below.

The drive into open nature away from the city lights is very exciting too, cause everybody is curious if we will be lucky or not to see something.
The guide and driver they got out of the car a few times, to check the sky and if it was not good enough, we just continued further north.
Suddenly we stopped somewhere down the road and got very excited because we were lucky tonight to see them, the movement and dancing of the northern lights was amazing to see , the different curves and forms, makes every picture you take of it look different. We also saw some pink, purple colors mixing up with the green and some shooting stars. Can’t remember anymore when I saw shooting stars, must be from my trip to Namibia in Africa in the Namid desert where I was staring at a sky full of stars. Now and then a shooting star was passing by if I’m correct. The northern lights, however were my first time experiencing it and I consider myself lucky because some people travel to the north just to see this phenomenon, but don’t get to see it because the weather conditions are not optimal. 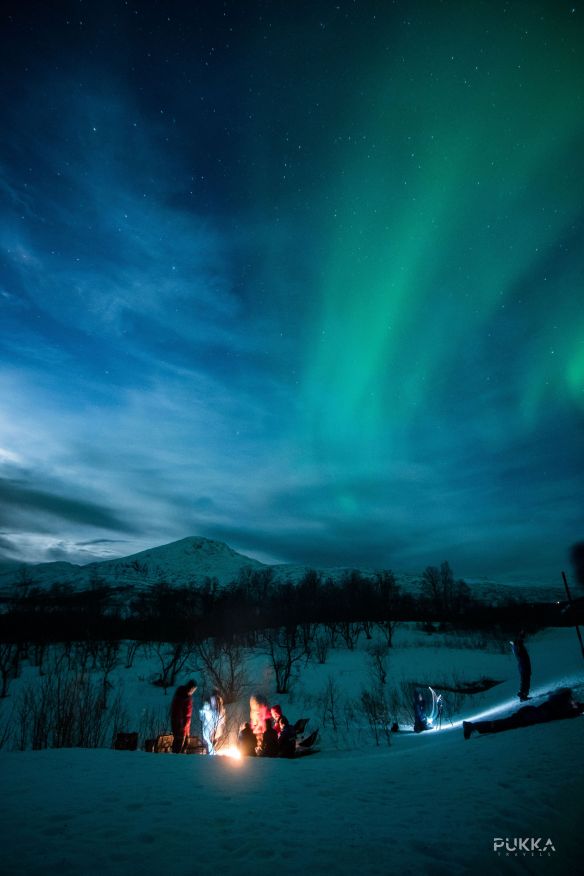 We celebrated it with hot tea, hot reindeer stew and some marshmallows around a campfire dug in the snow. We arrived in Tromsø again around 1 am in the early night. I went back to my hostel and since it was a Friday to Saterday night a lot was going on in Tromsø, people were going out, music was playing outside the bars and clubs and suddenly Tromsø was less quiet. My hostel was a bit outside of the center on a quiet street so I was ready for a good sleep and quiet night, to dream about the polar light that I just saw that night.